The German market too demand for more new shapes and sizes for reasons similar to above.

The other European markets could tolerate similar shapes and sizes most Diamond Bur manufacturer produced.

The difference between Tungsten Carbide Burs and Diamond Burs are ;

b) Diamond Burs as diamond powder, good as grinder, as well as cutting zirconia or metal
crowns.

Hence, for most dental surgical operations, Tungsten Carbide Burs are used and for other basic filling and crown and bridge, veneers etc. Diamond Burs are much better in operation.

Many countries impose stricter import regulation for ISO 13485 and ISO 9001:2008 approved Burs and has regular checks on the factories conformity to these ISO Standards.

Prices of most basic manufacturing processes has steadily increased since 3 years back. Diamond powder has increased since with over 300% and nickel block has increased also over 150% with increases to other electrolyte chemicals, labour cost and fixed overhead cost too.

The price for Diamond Burs will surely be increased in it export price in due course of time.
Posted by Jetavana at 1:56 AM 2 comments:

To apply for the FDA import permit, takes time and cost much money. Hence, popular Brand of Diamond Burs are imitated so that it can be imported and be sold freely within the Dental Market without FDA hassle.

The other reason for the Brand imitation is of course, just purely having a much lower quality Diamond Bur to imitate a better brand so that profit or sales could be increased many fold.

Hence, as mentioned in previous post, Dentist today who are brand loyal, do indeed has a hard time in evaluating the genuine Diamond Bur from the imitation Diamond Bur. Buying from a reliable supplier source and or changing brand loyalty has become the trend then.

Most professional web designers and SEO experts do claim that keywords and links and flash are the important issues that Search Engines crawl, whcih I do not object to. However, I do believe that the most important to be able to rank into the first page Search Engines is the editorial that covers all Keywords about the website.

Crosstech website are able to be always on the first page Search Engines, is mainly due to the much editorials on each page that covers each and every aspect of the website about Diamond Burs.

And, ofcourse, as suggested by the SEO experts, placing the right editorial sentences and phrases onto each and every webpage's "pagecodes" is another key issues for appearing at the first page etc.

Jetavana.
Posted by Jetavana at 7:17 PM No comments:

Crosstech Dental Diamond Burs are coming to the current Beijing 2009 Dental Exhibition starting from today. Crosstech do not exhibit itself as there are several Distributors from different provinces in China are present there at this annual important function for the Dental supplies for the north and north eastern part of China.

Crosstech do expect strong sales, but surprisingly, much more Gold Plated Dental Diamond Burs are sold and ordered even on the first day exhibition.
Posted by Jetavana at 11:22 PM 1 comment:

Japanese Mani Diamond Bur is one of the most popular Diamond Burs used by Dentist around the globe due to its good disposable quality at an affordable price.

Surprisingly, Japanese Mani Diamond burs has an open market policy, but it has appointed sole distributorship in only countries like South Korea, India and Russia.
Posted by Jetavana at 1:45 AM 5 comments:

One could then deduce with determined opinion, which Diamond bur supercede the other Diamond bur.
Posted by Jetavana at 12:18 AM 3 comments: 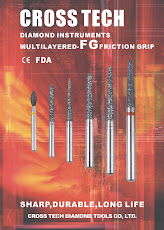